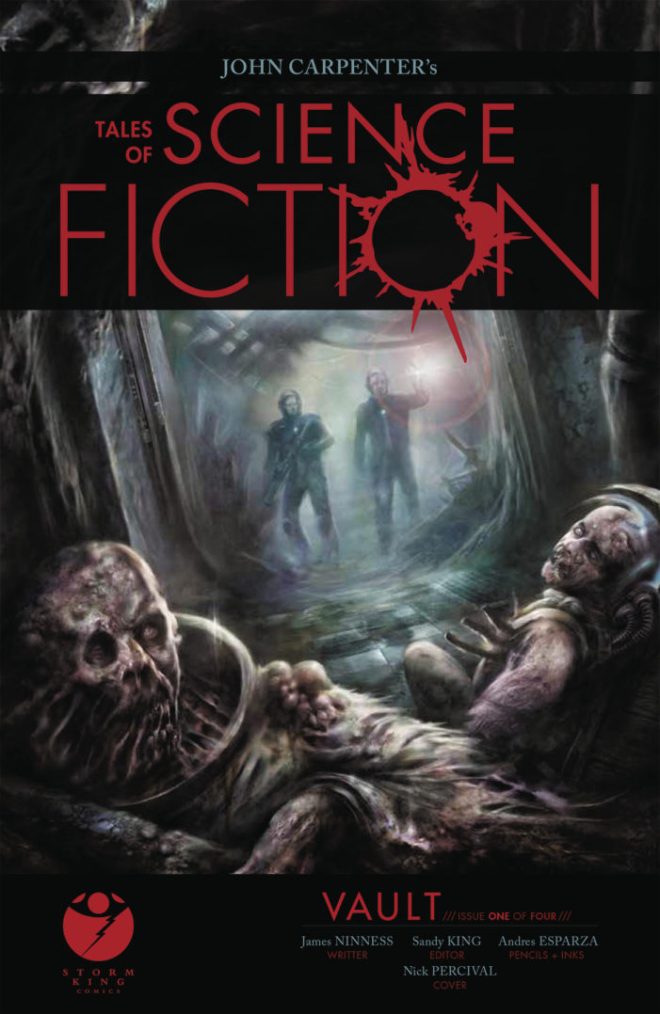 Posted on May 30, 2017May 25, 2017 by Life of a Female Bibliophile Posted in The PitTagged comic book review, comic books, Comics, John Carpenter, Storm King Productions, Tales of Sci-Fi Vault, The Pit, The Pit Media

Synopsis: When the moon-bound crew of Gaia stumbles across an enormous alien vessel, more technologically advanced than their own, priorities change. The mystery deepens when the crew discovers the name of the vessel along the hull…

*Vault (#1 of 3) is the first story of John Carpenter’s monthly anthology series Tales of Science Fiction.

Vault #1 takes its readers into a Sci-Fi space universe that is out of this this world. The story follows the crew of the Gaia as they trespass into an giant alien ship, and soon they find out they’re not alone.

The beginning of the story starts off in the present where they are investigating the alien ship, and then shifts to the past events that led us to that point in the story. We get a small introduction of the crew in Issue #1, and a small glimpse of their personalities. I was hoping to see a more personal background of each character, but the story only gives a general backstory of the crew mission. Hopefully, we will gain more insight into each character as the story moves along.

Usually, I’m not the biggest fan of hardcore Sci-fi stories, but Carpenter’s writing along with Esparza’s artwork has me immediately engrossed in the story. I found his characters to be interesting, the world building was smooth, and the suspense kept me on edge.

Esparza’s artwork felt so realistic, especially the way the characters emotions were drawn, you could feel their evident fear of the unknown and that helped to increased the story’s tension. On top of that, the use of vivid imagery and color, helped to make it a fully immersive experience.

I’m looking forward to seeing what will happen next in this three part series and I highly recommend reading this comic if you like galactic space stories.