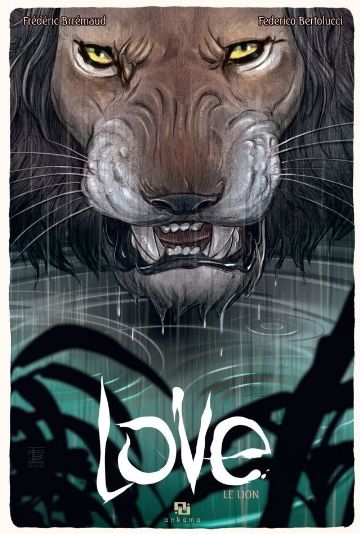 A young lion wanders the Serengeti in search of a pride to call his own. But being alone, he is watched with cautious eyes by those families he encounters along the way, including a coalition of rival males in search of their own pride to conquer.

So the nomad searches patiently, waiting for the opportunity to claim his territory and find a new family. But loneliness can breed ferocity…

The third volume in the lavishly illustrated, award-winning series of wildlife graphic novels, each depicting a day in the life of different wild animals, told through the dramatic lens of Disney-esque storytelling, like a nature documentary in illustration.

Love The Lion is the third installment in a series of wildlife graphic novels. It tells the tale of a young lion who wanders the African Serengeti who tries find his place in his homeland. Told in visually stunning pictures without the use of words, the reader relies on the artwork’s vivid detail in order to follow the story.

The reader is first introduced to the lion at a young age. He seems somewhat vulnerable and struggles to find a family to call his own. At the beginning of his journey he lives a lonely life where he must only rely on himself. Over the course of the story, the reader sees the young cub transform into a strong lion that will eventually stake itself at the top of the food chain.

While reading the story I was reminded of Disney’s The Lion King, however, Love The Lion, is a bit more realistic. It’s more graphic and depicts an accurate description of the circle of life that lies within in the animal kingdom. Readers will see firsthand, the relationship between predator and the prey. On top of that, the artwork is so lifelike it’s like watching aNational Geographic documentary on TV.

When looking at just the plot itself, I appreciated that it was simplistic and easy to follow since there was no narration. The use of picturesque details in the natural landscapes of the Serengeti allows the reader to transport themselves into the wild. I could tell that the illustrator, Federico Bertolucci, put a lot of work into the drawing each animal, especially focusing on their facial characteristics in order to convey the emotion of each scene.

As beautiful as the artwork was and even though the story line was well-written, I just thought that this comic was all right. I felt some kind of connection to the main character (animal), but in the end I wanted more from the comic. The plot wasn’t particularly gripping (for me) and I didn’t find the theme very interesting.

Overall, I’d recommend this to fans of wildlife/nature stories or readers of dramatic graphic novels.